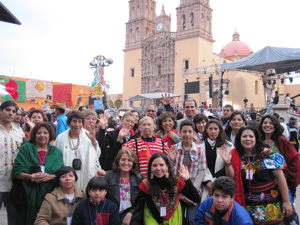 The international expansion of Reiyukai Teachings began in Mexicali city, the border between Mexico and USA, in 1975; and Reiyukai Mexico Office was established in Mexico City in 1978. The various activities have been developing since then. For example, together with the Mexican government, Reiyukai Mexico hosted the Youth Speech Competition and Letter to My Parents Contest for the purpose of bringing up the youth who will be leading the future of the country. They also have been working on cultivation of human resources to contribute the society through taking part in the ceremonies like El Dia de Indipendencia (Mexico Independence Day) or Memorial Service for the Spirits of the War Dead. With the expanding of the recent international eco-project, Reiyukai Mexico widely spreads an activity of Milk Carton Recycling which ordinary households can participate in; in this way, they encourage everyone to develop the feeling of appreciation toward nature, things, and so on. The various Buddhist books in Spanish were also published by the help of their support. With an aim of cultural exchange between the youth in Japan and Mexico, the Japan-Mexico Cultural Exchange Tour is planned annually. The participants are being selected from the Mexican government as well as the citizens in general.