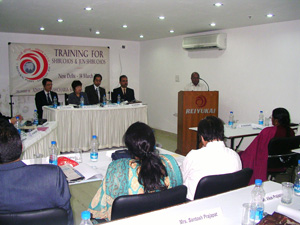 In 1976 the Reiyukai Convention with a great number of local members’ participation was held for the first time in Delhi; and Reiyukai India Office was established the following year. The Hindi-version of the Blue Sutra and Indian-version of the English Blue Sutra were published in 1979. In 1983, the Adhyatmic Sahcharya Sanstha was approved as a judicial person by the Indian Government. The Tamil-version of the Blue Sutra was published in 2009. Presently, with a focus on Gurgaon metropolitan area where Reiyukai India Office is located, Bokharo and Farrukhabad where the district offices are located, a wide range of activities are being developed; Family Day (a grand gathering that focus on an importance of family bond), Blood Donation Campaign, Speech Contest, Japanese Language Class, and so on are the examples of such activities.