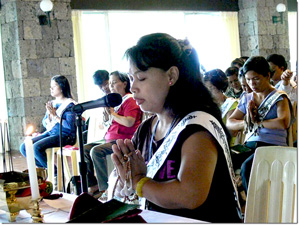 An inauguration of Reiyukai Philippines was in 1976, and its branch office was opened in Manila in 1977. The Filipino-version of the English Blue Sutra was published in 1994; the Tagalog-version of the Blue Sutra was published in 1999. Reiyukai Philippines, Inc. was inaugurated in 2008. The teachings of Reiyukai are now spreading across the country from Manila to Cavite, Leyte, and Pampanga where district offices and local gathering halls are situated. Especially, the Letters to My Parents Contest has been held since 1995 along with the Letters to My Children Contest which also has been held afterward. These two contests have been organized on a nationwide scale now.